Although not part of the National Parks System, I felt the need to include in this series some shots of Stu Patterfoot along the Oregon Trail in Wyoming. Because it’s history. Because it’s Stu. And because it’s so interesting.

During the mid- and late-1800’s, wagon train emigrants stopped overnight along the nearby North Platte River, and many recorded their names and dates in the soft limestone bluff, which has come to be known as Register Cliff.

Registration Cliff is a rock face where travelers could record by carving into the soft rock that they had made it that far. But today if you try to record that you, too, have passed that way, you’ll be arrested for vandalism. So acknowledge the history, sense the history, look at the history, but don’t touch. The near-barren landscape (trees only grow because of the nearby river) gives one a desolate feel of what early emigrants may have felt.

Most impressive (to me) at this spot was the worn rock made from thousands of wagon wheels heading for a new life further west. The sides of the prairie schooners must have scrapped the walls as they passed through here, with each wheel cutting deeper into the rock.

There are also thousands of cliff swallows guarding the wall. (Look above Stu’s head on the Register Cliff sign.)

As you write your stories, visit your settings. See the flora and fauna, and smell the history. Gather hundreds of ideas for future stories. Keep on writing. 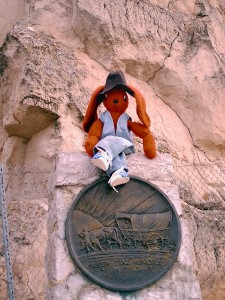 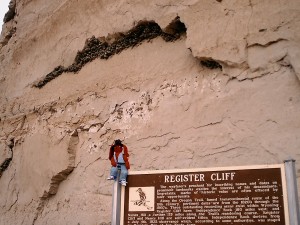