In Celebration of our National Parks Birthday which turns 100 on August 25th, here are shots of Pictured Rocks National Lakeshore in the Upper Peninsula of Michigan. It is named such because if the dells rock formations along the Lake Superior coast, but there are also the dunes to climb, the many, many waterfalls to hike through woods to see. Blues and greens. The water is very clear. Greens and blues and clear. And lots of water in many forms.

Granted, these are summer shots, which is a great time to head north to this national treasure. If you go in winter, you would have another wonderland scene, but the predominate color then would be white-white-white. Also, mind, that although the water looks inviting, only if you are of polar bear descent should you attempt a dip into cool Lake Superior – any time of year. 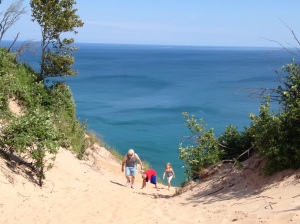