Last Friday, I woke at 5:30 and Jeff at 6. We decided since it was his day off work, and because the temperature was going to soar into the 90’s, we’d get ready and go for an early morning hike – on the last day of spring. We prepared our house for a showing, just in case we were called for one while we were gone, and then left the house by 8:00. 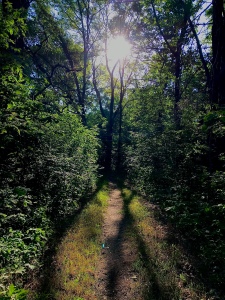 Our target hiking trail for the day was the Scenic North Country Trail near Fort Custer State Park, about 20 minutes from our house. No cars were in the “parking lot” – a dirt widening in the road, enough for 2-3 cars.

So off we went into the dry-dry woods, surrounded by hundreds of mosquitoes who enjoyed our company.

When we came to a large fallen tree over the trail, I was thinking about turning around, and regrettably looked behind from where we had come, for it was too early to quit. When I turned back to Jeff, he already was sitting on it, swinging one leg over that supposed deterrent. The mosquitoes encouraged me to quickly follow suit.

At one point Jeff stopped to look at a flower and asked me what it is. I know the names of many wildflowers, but didn’t for that one. We’d brought a wildflower guide, but again with the mosquitoes who really-really wanted us to stop long enough to land thickly upon the only moist things for a long ways. So we decided to look it up later. But what we did identify, and moved along too swiftly to take photos, were daisies, yarrow, deadly nightshade, and yellow waterlilies. However, the waterlilies were too far away for a good shot without waders.

About halfway into our walk, we reached the bog. The boardwalks and slightly raised area between two marshy pond areas had always kept our feet dry in the past, even a few inches from the water. This time, though, it was hard to avoid sinking into the soft black muck when there were no boardwalks.

My running shoes quickly led the way to soak my socks within. I was afraid that each time one of my hiking poles sank into the mud that when I pulled it out with the suction, that it would be missing it’s end cap. But they both held on strongly. The disappointment was that I had been developing a small tear in one of my shoes near my baby toe. So I used the ultra strong gorilla tape I’d recently purchased. It is so strong, it’s a bit of a struggle for me to pull it from the roll. However, it was no contender for the North Country Scenic bog.

Sitting on a bench on the boardwalk in the middle of this swampy area, we were filled with sounds — birds singing and bullfrogs bah-rumping. But the wonderful thing was that there, surrounded by wetness, there were no mosquitoes. So we rested a while.

I watched two dragonflies playing with each other and tumbling in the air. (Wink-wink) And then they’d separate to rest, then go back to their “playing.”

We continued on the trial until the boardwalk ran out and the narrow black trail was rather sinking. I struggled on, knowing the land rose someone soon. But the bog sucking at our feet and sticks-poles made the decision for us to turn about. Some dryer time we may continue on to the other side of the bog.

(Two photos of the trail & one, the bog)

Back into the dry woods and dusty grey trail. The green forest greeted us with hoards of waiting mosquitoes. We quickened our pace once again.

If men sweat and women glow, then I had streams of glow flowing into my eyes and down my face and shirt. The temperatures were rising with the sun. We fairly leapt over the fallen tree.

We arrived home about 10:00, happily satisfied with our hike and the fact that we had an air-conditioned house waiting for us to shower in.