Last Saturday, we went to a funeral 90 minutes north of us. For a lot of the drive up, I spoke to the leafless trees through my closed van window: “Hi there, my pretties.” “I’ve missed you terribly!” “I’ll be among you soon.” and other related sentiments. After all, it has been nearly a month since our last real hike through a woods. 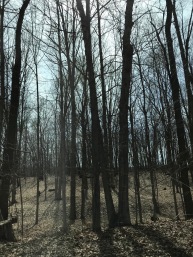 We attended the sad funeral. Long hugs. Light talk and meal. And afterwards, because of the proximity, we headed for the nearby West Coast.

Oh, the choices! Just to ride down the coastline back home? Take a hike through the woods? Or perhaps a walk on a beach? We’d packed extra shoes to change into, but not extra clothing, plus we’re limited with time.

I tried to decide which I missed more, water or woods; to hike or to beach? We passed several trails on the short drive to Lake Michigan, with a promise from me that we’d return someday to explore. We chose Holland State Park. 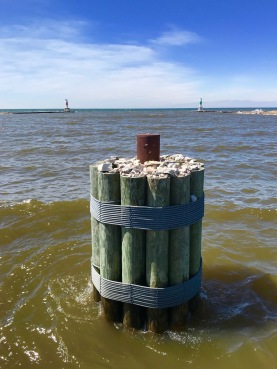 It was a sunny Saturday with temperature in the lower 40’s along with a good, stiff wind, meaning surfers and kiteboarders were out in their wetsuits. 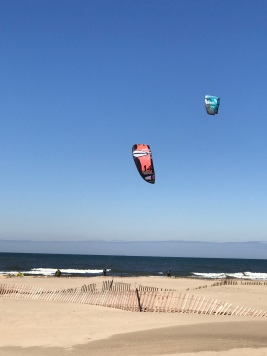 We chose to hike the narrow (about 4’ wide) pier to the north light tower. The waves crashed upon the rocks occasionally spilling onto the concrete walk. They also were not consistent in height. The walk was dry for the most part (foreshadowing disclaimer) giving us a false sense of security. The north side retained a sand-encrusted snowbank.

Four people in their 20’s stood close to the end of the pier.

“Soggy shoes,” I commented, pointing towards their feet.

“Worth it,” one of the girls replied as the group wiggled around us and headed back to shore.

Jeff and I ventured on, closer and closer to the light tower at pier’s end. Then a wave crested on one side and Jeff darted towards the wider end of pier. Another wave followed shortly after coming over from the other side.

We giggled and I took a few snapshots.

Remember me saying that the waves were not consistent in height? We heard it coming just seconds before we saw it. We both leapt as the wave washed under us. Gravity forced us downward splashing into about eight inches of water.

We spun and hustled back single file towards the beach. Our clothing was soaked from the knees down. We joked about wading in the ocean, and having prunes at the ends of our legs by the time we’d arrive home.

Back at the van the thought occurred to me that if a really inconsistent, bit larger wave would have come, we might have been swept right off that pier.

Jeff rather concluded that a forest hike was now out of the question. I reluctantly agreed, glad to have heat blowing on our feet. But never fear, dear woods. We have future plans involving you as well.