A week ago, Friday, March 1st, we had winter cabin fever. That day it reached up to the mid-20’s. The day was overcast-gloomy, like most of the week had been. So… being sick of the cold and wind and snow, what did we Carlsons do? We decided we needed to get outside. (What can I say?)

We chose to hike a new-to-us trail, part of the North Country Trail we haven’t been on. It started at the sort-of trailhead across the highway from Fort Custer State Recreation Area. The “parking lot” is a space off the shoulder, enough for one or two cars. We were the only vehicle there; so, not crowded!

Although spring was still twenty days away and the trees were leafless, daylight had increased, causing the woodland birds to start their chirping and mate-finding. I’d like to stop the sound description with that serene twitter of birds singing in the woods, however, the trail at this point runs between a busy 4-lane road and a 2-lane road, with about a mile or mile and a half pathway through the forest. Yet, our eyes told us we were in the woods.

With the recent snowfall, the snow didn’t crunch under our feet like it had the previous week. However, there was The Thaw a couple of days previous, so underneath the light snowcover was ice. My hiking stick slipped at nearly every step, so it was a more careful walk than our usual hiking stride. We weren’t the only ones slipping through the woods. Even the deer had an obvious slip or two. 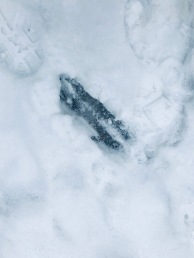 We were alone on the trail, yet not quite alone. There was a canine present somewhere. I could tell by the snowfall distorting other animal prints (rabbit, squirrel, opossum with their cute little thumbs) that the canine prints were recent, that day, and didn’t have corresponding fresh human footprints. Of course, the markings of yellow snow here and there also led us to conclude the recent passing. Around each bend, over each hill, we kept our eyes open for…wolf! Oh, wait. We weren’t in Canada. Loose dog, then.

Interestingly enough, just before when we came to the board telling we were now entering Fort Custer National Cemetery, and to stay on the trail, and to be respectful of the hallowed ground although we were still in the woods with no grave markers in sight, the canine prints veered off into the woods. Why did it refuse to enter hallowed ground? Yes, fiction-writer that I am, the thought of werewolf popped into my mind.

A little ways past that board was this seemingly conflicting sign:

No trespassing! Welcome! We understood it to mean we had right of way to proceed, but just to stay on that way. Still…amusing.

After this point we were truly alone. Not even human footprints lay before us in the snow, and the animal paw and hoof prints were a day or more old. Even the birds had stopped singing. Hallowed ground.

We had planned to walk the linear trail for a certain amount of time, and then reverse back to our van. But as we continued walking, the terrain changed. The trail became more interesting with each step. We kept saying, “Let’s just go to that bend (tree, or top of hill, or fallen tree), and then turn around.” We might have stopped at the fallen tree, but visual curiosity kept us going. We climbed over it, stepping through large branches which lay across the narrowing and unused path. Down we descended toward what would be a marsh in the summer, and past an old beaver-felled tree. 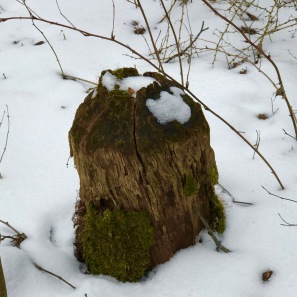 At this point, the trail continued over a small foot bridge with a narrow strip of land crossing through the frozen wetland on either side to the hills beyond. We concluded that hiking this section during winter was preferable than summer because, you know: Mosquitoes!

We uneventfully returned to our van, then drove across the highway and into the state park for our picnic lunch — inside the van, of course, but with a lovely natural view, and all alone.

Enjoy the out of doors. Stay safe. And when you must remain indoors, do so with a good book.