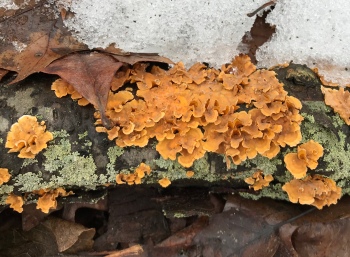 Of course, any staycation for us must include hikes to the woods and beach visit. I live in Michigan, after all. Today was supposed to be the nicest weather for the week. Today we decided to head to the west coast for a hike or two. The entire day was overcast and in the low 30’s (borderline freezing).

It was our first time to Grand Mere State Park. Fifteen years of passing it by on the interstate, and we never stopped. Today it was a destination. Snow and ice dotted the low-lying ditches, most covered with tan sand giving the flooded areas a tannic pine look. The dirt parking lot was soft in a muddy tan. We hesitated getting out of the car, but in the small parking lot (capable of holding about fifty cars if you squeezed together), there were already five cars. Popular mud spot. We tentatively stepped out of the van and made our way at least to the outhouses and picnic area. Surprise! The path was paved from that point. Well…sort of.

As we discovered, the paved Nature Trail lays low between North and Middle Lakes and likely to flood, as well as having recent snow meltage. The fall leaves cushioned the path as well, rotting into wonderfully rich, black compost beneath our shoes.

After a while, the trail became too muddy for us to feel it was worth continuing in our chosen footwear…so…we headed upwards, on a sand path going over one of the many sand dunes in the wooded park. Jeff slipped on ice which was covered by oak leaves. I fell once to the ground stepping over a many-twigged branch which wrapped itself around my other leg. It was all part of the adventure.

Although we hiked an hour, we never made it to Lake Michigan. It was not our intention. This was merely a serendipitous exploration. There were signs for waterfowl hunting and one warning of ticks, although not pertinent in winter hikes.

I spotted a large bird from the distance. It looked familiar, but unfamiliar. Only when it flew did I recognize it as a robin – with feathers fluffed up making it to about three times its normal size. Poor cold thing.

We only saw a couple people in parked cars, and one man walking his dog, otherwise, the park was ours. Quiet. Serene. Late winter wilderness. Gotta love Michigan in all seasons. 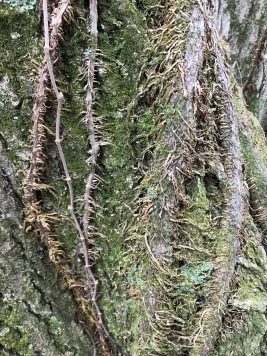