When I hear the expression “truth is stranger than fiction,” I usually think of either unusual people or events. Not plants. But besides making up flora and fauna for my stories, I’m always open to the unusual, in reality.

While in Arizona last January, I was gifted a group of unusual plants. My first thought upon seeing them was that of European sand snakes.

I encountered European sand snakes at the Buffalo New York Zoo. To me, they are the creepiest of all snakes. Not that I think all snakes are creepy, mind you. These particular European sand snakes blend in perfectly with the sandy-brown soil, and only have their top inch or two rising out of the dirt. Dozens of unblinking, glassy eyes would stare at me from bodiless forms plunged under the same-colored dirt so you couldn’t tell how long they were. Staring, staring, watching my every step past, turning together as though they were all connected under the soil to one body. Harry potter, go away!

I thought of European sand snakes when I saw these unusual plants because they were camouflaged the same color as the soil they were stuck in, and actually nearly the same dull brown color of a certain afore-mentioned reptile.

My second thought of my gift was that they looked like stemless mushrooms. I love the wide variety of shapes and colors of mushrooms found in Michigan woods. These plants are uniformed, rather flat and quite round.

However these plants are neither snakes nor mushrooms, I tell myself as I observe them. They are South African button cacti. Cacti without spikes, mind you, but they  do look a lot like buttons. Well named. 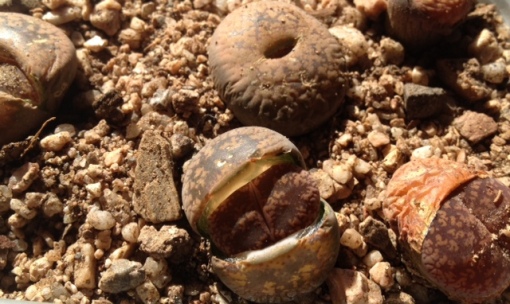 My gifter told me they would bloom in March. He instructed me to put them in the sunshine “with no awning.” He has never been to Michigan. Awnings are used where there is sunshine. Michigan has very little of that. I placed my new cacti in a south-facing window of my kitchen where they get about four hours of daylight, if not sunlight, a day.

Mid-February I noticed they started splitting down their centers. Or perhaps because of all the sunshine (ahem) they were starting to blossom early?  I’ve seen many cacti flower and they are gorgeous and brightly colored. But my south African button plants merely split their tops right down their centers and then shed the top layer of membrane – just like a snake might do. Like, say, a European sand snake of the same color.

I’m holding out for an actual flower blossom instead of a split-and-shed-the-top-skin bloom. I could do the research and look it up. That’s the easy way out. That way takes away the wonder. I’ll just continue to observe and come to my own conclusions, for truth is stranger than fiction even in the plant world.