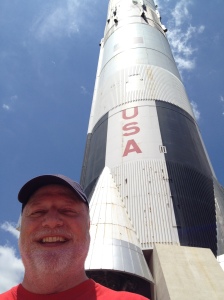 I sent this first picture of Jeff to our family while we visited Alabama and texted the line, “Guess where we are?” One of our sons replied, “USA?”

It was Jeff’s idea to swing by the U.S. Space and Rocket Center in Huntsville, Alabama, since it was so near the northern border where we’d be. He’d heard of the place his whole life, and was always interested in going. I’d only heard of the Space Camp from thirty years ago when one of our elder son’s playmates was heart-set on going there.

The Center isn’t just about rocket ships and space craft. It’s also full of inventions and mechanical devises and the lives which led up to the remarkable feat of putting ships in space. Being a kid myself, I liked the Robot Zoo exhibit, but there were kids playing on each one of the huge mechanical toys. I felt a little silly saying, “Hey, I was here, first. Let me move the grasshopper’s mouth.”

Of course, most of the “exhibits” (i.e., actual space crafts which went beyond our atmosphere and returned) were outside, as they were quite large, including Saturn I and Saturn V. (Impressive even to someone tagging along with her husband was like a kid in a candy shop.) There were the tiny Gemini capsules, examples of freeze-dried space food, the contamination trailer used on the first flights, and so, so much more. I honestly do recommend visiting it. It’s a wonderful part of American history.

For most of the time, I was only somewhat interested in everything around me, enjoying my husband having a wonderful time…and then I came across a moon plaque on the floor and froze, trying not to let my tears flow. 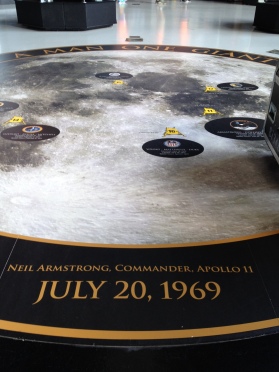